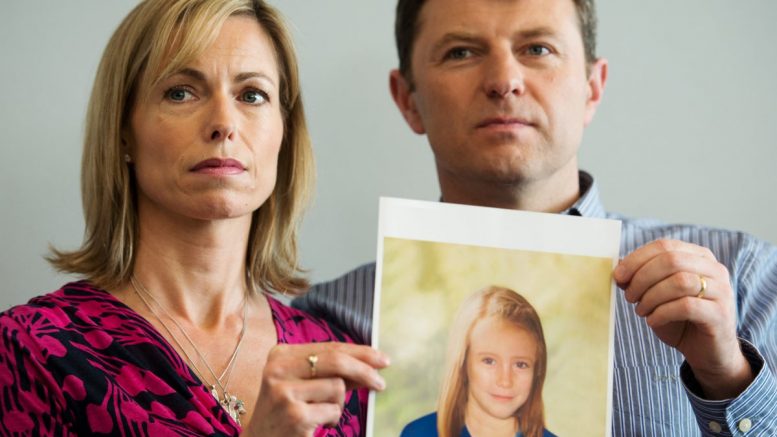 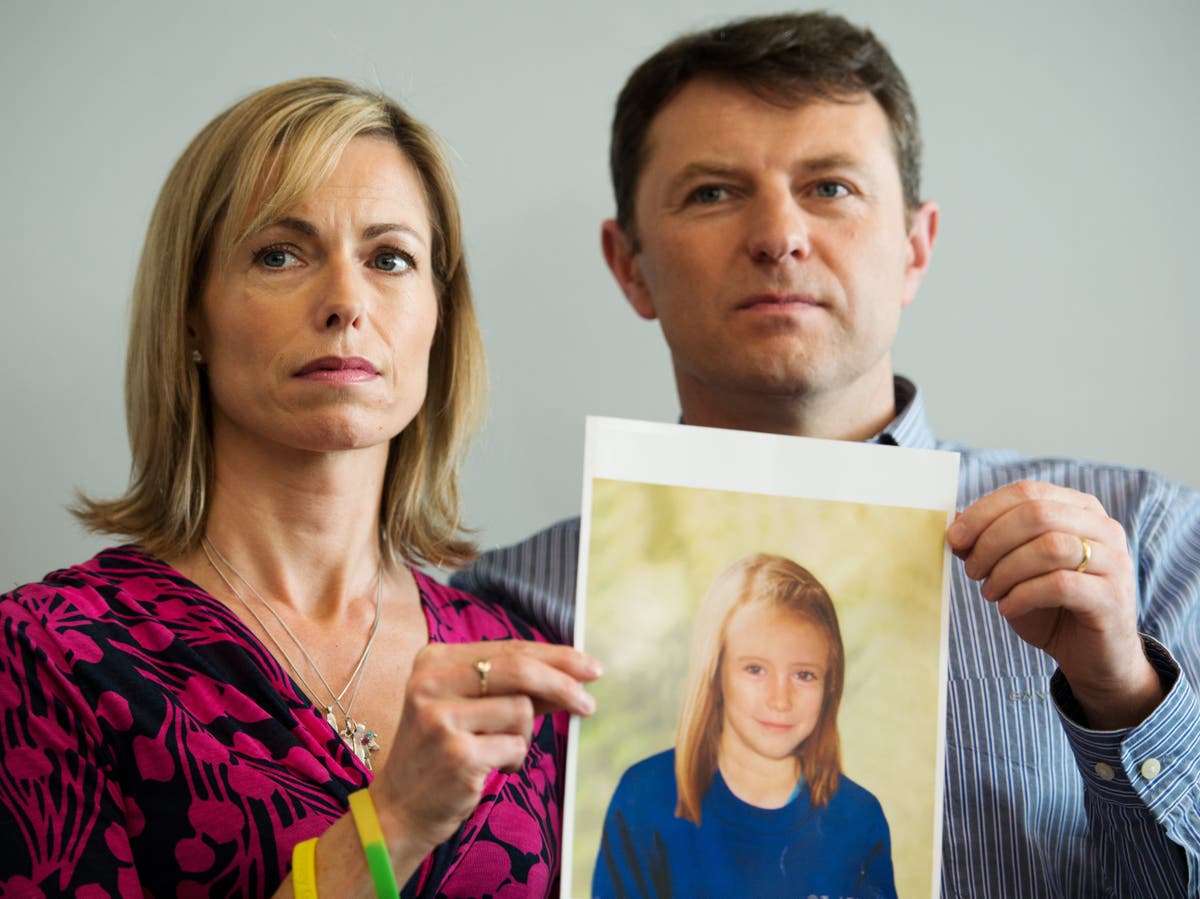 This Wednesday should have seen Leicester schoolgirl Madeleine McCann turn 18 and celebrate the milestone with her family and friends, a bright future of infinite possibilities lying before her.

Instead, she remains one of the most famous missing people in the world, her disappearance from the Portuguese holiday resort of Praia da Luz on the Algarve on 3 May 2007 still unsolved after 14 years of investigation and still the subject of intense interest among the public and press.

Her parents, Kate and Gerry McCann, recently posted a statement on the Find Madeleine website marking the upcoming birthday by reiterating their hope of being reunited with their long-lost daughter.

“Every May is tough – a reminder of years passed, of years together lost, or stolen,” they wrote. “This year it is particularly poignant as we should be celebrating Madeleine’s 18th birthday. Enough said.

“We hang on to the hope, however small, that we will see Madeleine again. As we have said repeatedly, we need to know what has happened to our lovely daughter, no matter what. We are very grateful to the police for their continued efforts.”

Here’s a reminder of the events of the case, a year after the emergence of a new suspect in Germany revived the prospect of the mystery finally being solved.

The story began when the McCanns – affluent doctors Kate and Gerry, their three-year-old daughter Madeleine and her two-year-old twin siblings – joined a group of seven family friends and their five children on holiday at the Ocean Club in the village of Praia da Luz on the south western tip of Portugal on 28 April 2007.

After a pleasant spring break by the sea, the adults in the party went out for dinner at the resort’s open-air tapas bar on 3 May, gathering at 8.30pm. The children were left behind sleeping in their respective apartments with the doors unlocked and a rota system in place among the parents to ensure that someone returned every half-hour to check on them.

When Kate McCann took her turn and returned to her apartment at 10pm, she raced back to the restaurant screaming “Madeleine’s gone! Someone’s taken her!” The police were quickly called and 60 staff and fellow guests searched the complex, calling out the girl’s name in vain until daybreak the following morning.

Border police and airport staff were put on alert and hundreds of volunteers joined the efforts to find the missing girl over the coming days, the case fast becoming a sensation.

The Portuguese authorities would later attract criticism over their conduct in the crucial earliest hours of the investigation when the trail might still have been warm, accused of making rudimentary mistakes like failing to conduct a house-by-house search of every local residence or interview all of the other guests at the resort, acting slowly to erect roadblocks and potentially compromising forensic evidence at the crime scene through carelessness and incaution.

The police initially stated that they believed Madeleine was still alive and had been abducted from the room by a stranger as the parents described their “anguish and despair” over her vanishing, a worst fear realised for any parent.

On 26 May, police issued a description of a suspicious man seen on the night of the girl’s disappearance. The individual in question was spotted by Jane Tanner, one of the McCanns’ dining companions, who said she had seen a Mediterranean man with dark hair and beige trousers carrying a child close to the apartment when she went to check in on her own children. Scotland Yard would later come to dismiss the sighting as a red herring.

The search continued as the summer progressed amid a wild media circus and with huge fundraising activities underway, the McCanns setting up Madeleine’s Fund on 15 May to raise cash to support further investigation and keep the profile of the case high, attracting generous donations from celebrities like Richard Branson, Simon Cowell, JK Rowling and Coleen Rooney. By 30 May, the case was such a cause celebre that they were being flown out to meet the Pope at the Vatican in Sir Phillip Green’s Learjet.

A local man, Robert Murat, subsequently became its first suspect and had his house and car searched, his swimming pool drained and his electronic devices confiscated but no evidence was found to link him to Madeleine and the matter was soon dropped.

By June, the Portuguese police admitted that they had failed to protect potentially useful evidence at the scene as frustration with the lack of developments grew and the media began to question whether the McCanns themselves had been involved in the matter.

Lurid tabloid allegations suggested the couple and their friends might have been swingers and that the McCanns, as physicians, might have been in the habit of sedating their children, while others claimed inconsistencies in their version of events.

The intensity of the hostility towards the parents would later be described by Roy Greenslade of The Guardian as “no journalistic accident, but a sustained campaign of vitriol against a grief-stricken family”, singling out The Daily Express and Daily Star for particular condemnation.

Relations with the local authorities would ultimately sour as the latter came to resent British intrusion into a Portuguese inquiry, according to Anthony Summers and Robbyn Swan’s book Looking for Madeleine (2014).

By August, Madeleine has been missing for 100 days and police admitted for the first time that she may never be found. They also told the McCanns that they were no longer considering the matter an abduction case but, rather, a murder inquiry.

The McCanns themselves were interviewed as “arguidos” (suspects) by Portuguese police in September, with the parents told that the dogs had discovered DNA evidence from the missing girl in the boot of their holiday rental car, lines of inquiry that had already been leaked to the British press. They vehemently denied having any part in her disappearance.

Despite being listed as suspects (a designation that would linger until the following July), the McCanns were allowed to return to Britain on 9 September. A day later, chief inspector Tavares de Almeida of the Policia Judiciaria in Portimao signed a nine-page report concluding that Madeleine McCann had died in their apartment as a result of an accident, that the tapas dinner and rota checks on the McCann children had been part of a planned cover-up, that the family’s friends had helped to mislead the police and that the McCanns had concealed the body and then faked an abduction. A public prosecutor subsequently applied for the confiscation of Kate McCann’s diary and Gerry McCann’s laptop plus the group’s phone records.

On 2 October, chief inspector Goncalo Amaral was removed from the case and transferred after alleging that the British police were only interested in pursuing leads favourable to the McCanns. He would later publish a book, Maddie: The Truth of the Lie, the following summer, resulting in a lengthy libel battle with the McCanns that would run back and forth through the courts until March 2017.

Back in Britain, Gerry McCann issued a video that November in which he speculated that his family had been watched by a “predator” during their stay at Praia da Luz. His wife had come to believe that a potential perpetrator could have seen a note in the resort’s guest book visible to all in reception noting their dining arrangements on the evening of Madeleine’s disappearance. The couple followed up on 20 January 2008 by releasing a sketch of a “creepy man” they said other holidaymakers had said they had seen loitering at the Ocean Club.

In April, a month before the one-year anniversary of the fateful night, Portuguese police travelled to Leicestershire to conduct further interviews with the McCanns’ friends.

Then, on 21 July, Portugal’s attorney general, Fernando Jose Pinto Monteiro, announced that there was no evidence to link either the McCanns or Robert Murat to the disappearance and closed the case, unsolved.

With the trail cold and no closure in sight, the McCanns continued to publicise their cause, issuing computer-generated images of how Madeleine might look now that she had aged on 3 November 2009 and condemning the release of previously unseen Portuguese police files – detailing possible sightings of their daughter – to British newspapers in March 2010.

The McCanns published a book of their own about their ordeal in May 2011, entitled simply Madeleine, which was serialised in The Sun as the newspaper led a campaign calling on British prime minister David Cameron to launch a new inquiry. He did so.

It began to yield results in 2013, with Scotland Yard formally announcing a new investigation in July and saying in October it had identified 41 potential suspects. That same month, BBC Crimewatch released an e-fit image of a man of particular interest who had been seen in Praia da Luz with a child matching Madeleine’s description in May 2007.

Detectives arrived in Portugal in January 2014 promising new arrests and finally searched the village in June, interviewing four people the following month but without unearthing new information. The quartet would be definitively ruled out in April 2017, before the UK government said it would continue to fund the investigation until 2020, having already admitted it had cost £10m in its first four years of operation.

That investment had enabled detectives to have tens of thousands of documents translated, investigate over 8,000 potential sightings, take 1,338 statements, collect 1,027 exhibits and investigate 650 sex offenders and 60 persons of interest, all without definitively establishing the truth.

The Madeline McCann case lay dormant before suddenly exploding into life in June 2020 when German media revealed that Christian Brueckner, a 43-year-old prisoner with a track record of child abuse and drug trafficking, had been identified as a new suspect by the public prosecutor of the German city of Braunschweig.

He had reportedly been living in a Volkswagen camper van in the Algarve at the time of Madeleine’s disappearance and one woman has since come forward to suggest she saw a girl that might have been Madeleine speaking German in a supermarket in Portugal in 2017.

German investigators classified their probe into his movements as a murder inquiry, saying they are working on the assumption that Madeleine is dead and reporting last July that they had found an abandoned cellar beneath his former allotment near Hanover where she could, theoretically, have been held captive.

Hans Christian Wolters, the prosecutor leading the investigation into Brueckner, has said he is “very confident” the inmate is responsible for kidnapping her.

“If you knew the evidence we had you would come to the same conclusion as I do but I can’t give you details because we don’t want the accused to know what we have on him – these are tactical considerations,” he told the BBC last December.

It was recently revealed that Madeleine’s Fund still had £773,629 to spend as of 31 March 2020, meaning the McCanns can continue to bankroll a private investigation to find their daughter long after the police hunt is finally drawn to a close, should they choose to.